As the target audience for Pinterest I was thrilled to see the founder, Ben Silbermann speak at SXSWi. I thought I would share what I am calling the Fabulous 4’s: 4 upcoming enhancements on Pinterest, Ben Silbermann’s 4 Favorite things, and 4 Fun Facts about the history of Pinterest.

4 Upcoming Pinterest Enhancements
1. Re-Designing and enhancing profile page to be more of a snapshot of who you are (launching within weeks)
2. Making it easier to connect with others with common interests (not just your twitter followers and Facebook friends)
3. Expanding the number and type of things you can pin (video, sound bites, etc)
4. Platform expansion for iPad, Android, iPhone, etc.

4 Fun Facts About Pinterest:
Fact 1: Ben Silbermann, founder of Pinterest started at Google. Originally a collector of stamps and other collections, wanted an online outlet.
Fact 2: Ben Silbermann, started Pinterest by emailing his idea to 200 of his friends and 100 of his friends opened the email. First few months only had 9,000-10,000 users.
Fact 3: Up until mid-2011 Pinterest only had 5 employees working out of an apartment. Now Pinterest has 20 employees, 10 were hired in the last 4 months.
Fact 4: Goal of Pinterest is to help others discover things that they didn’t know they wanted (things that are hand-picked just for you), your boards should be collections of things in the online space that you can be proud of.

Thanks Pinterest for giving me inspiration in fashion, food, travel and so much more. I can’t wait to see what comes next. During day 3 of SXSWi I attended a panel on, “Can the biggest ideas fit in the smallest spaces,”
by Google. Haven’t you often thought to yourself, man they should really bring back some of those classic ads – those that bring back nostalgia of our childhood or just make you feel warm and fuzzy inside? Well that is exactly what Google has done in their new “Project Rebrief.”

Being the 18 year anniversary of Internet advertising, Google designed an experiment to re-imagine what advertising can be and to push the boundaries of how creative ideas and technology can work together while creating an emotional connection with the consumer. Throughout this experiement they had it documented by Emmy-Award-Winning director, Doug Pray.

During the session they took us through 4 case studies on classic ads that they are now enhancing in the the digital space Coke, Alka-Seltzer , Avis, and Volvo. I encourage you to take a look at each brand experiment; however, would like to focus on the Coca-Cola initiative as this is the one that really connected with me on a emotional level.

For those that recall the 1971 Coke TV commercial, “Hilltop” where a chorus of young people from around the word sing “I’d like to buy the world a Coke” – this was an iconic ad created by art director, Harvey Gabor that has been inducted into the Advertising Hall of Fame.

Now in 2012, Google has figured out a way to brink this idea to life within the digital space. Details include:

The Original Brief: Demonstrate Coca-Cola’s power to connect people while highlighting the global ambitions of the Coca-Cola brand.

The Re-imagined Work: Enable users to actually “buy the world a Coke” using Google’s display advertising platform and a series of specially-developed vending machines. In the spirit of the original work, users can record a message and send it with a Coca-Cola to connect with someone on the other side of the world. The receiver can then respond with a text or video message, completing the connection.

The Concept: Harvey’s re-imagined ad enables users to actually ‘buy the world a Coke’ from their computer or phone, and connect with someone on the other side of the world through the magic of display advertising. Users can select a location, attach a personal video or text message, and then watch as the Coke is delivered to a specially-designed vending machine on the other side of the world. The receivers at the machine can then send a thank you message back to the sender, right from the vending machine.

The Take Away: The world is closer than ever before. Now, through the magic of ad technology and vending machines, consumers can connect with strangers across the world through a touching video or text message exchange. Ad servers communicate with vending machines in real-time, establishing unique connection opportunities between digital ads and the physical world, like never before. The payoff is a unique personal film that is created and can be shared of this great “visual voyage.”

The Future: Soon, more people will access the Internet from mobile devices than computers around the world. Using AdMob, the experience is brought to life on mobile devices, making it possible to send a Coca-Cola across the world from anywhere.

In my opinion this is a brilliant concept and a great way to engage users in the digital space, I hope to see more come from Google and The Project Rebrief experiment. Bravo! Hands down, the best panel I have been to so far during SXSWi has been “Top Chef: How Transmedia is Changing TV.” As a newbie to both SXSWi and Top chef, I was pleasantly surprised with the flow of this panel…and I must say, the props go to Andy Cohen, Bravo’s Executive Vice President of Development and Talent, for his humorous and engaging flow of the panel.

Not only did he do a great job of integrating Twitter feeds into his questions/banter throughout the conversation with Top Chef’s head judge, Tom Colicchio, he never let a dull moment go by. Had I had a glass of Pinot Noir at 11:00am, I would have participated in his game of drinking anytime someone said the word, “chef.”

Overall, what an impressive panel of risk takers and innovators in the TV space. The panel included:

For those that did not watch Top Chef Texas, this was the first time they integrated social media and an online component onto the TV show. Chef’s that were eliminated from Top Chef had a chance to compete in an online competition called “Last Chance Kitchen” in an effort to get back into the final 4. Who would have thought that a concept like this would lead to 8 million streams and 26% of viewers engaging in online content?

Thus far, this seems to be the best example of how a network and show has integrated their viewers and online audience into a television show.

Bravo is a great example of how story telling across multiple platforms can be successful. Because of this success I plan to track their next big media play of co-creation content by fans in the upcoming season of Real Housewives of NYC.

As Lisa Hsia said, “…you need an evangelist and need to show results in the social space.” I think Bravo is well on their way to being the leaders in Transmedia. Can’t wait to see what you do next.

For mroe about this session, please visit: http://sxsw.com/node/9996

Check out more of Andy’s happenings at @BravoAndy

SWSWi is starting today and there are already predictions in the news of the emerging trends we will see here in Austin this week. Can you imagine displaying content from your PC or tablet on your arm or embedded in your favorite t-shirt? Skinput devices is just one of the technology predictions USA today is reporting we will hear buzz on this week.

Other noteworthy trends to keep a look out for this week include:

2. 2nd Screen Experience: Enhance your TV viewing experience for live events and reality TV shows. For example, during the Super Bowl viewers could keep up with Eli Mannin’s passing yardage on the right side of the screen, with real-time statistics.

3. Smart Homes: Electrochromic window technology would let  house in Colorado block out cold during the winter and disperse heat in the summer.

4. Superbatteries: enhanced battery life on electric cars for up to 300 miles (from 50 – 100 miles currently). I might need one of these this week during the SXSWi panels – word on the street is power outlets are in high demand in the Austin area.

To read more about the USA Today technology predictions, check them out here: 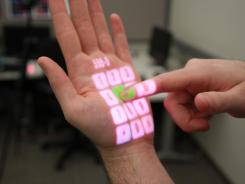 ‘Wacky’ ideas find fertile ground at SXSWiThe crew from Google’s Android team was huddling late last month to put the final touches on an idea. The annual South by Southwest Interactive (SXSWi) conference which kicks off today in Austin – one of the hottest tech gatherings of the year – was fast approaching, and the group was toiling on the next phase of digital content for Android phones.